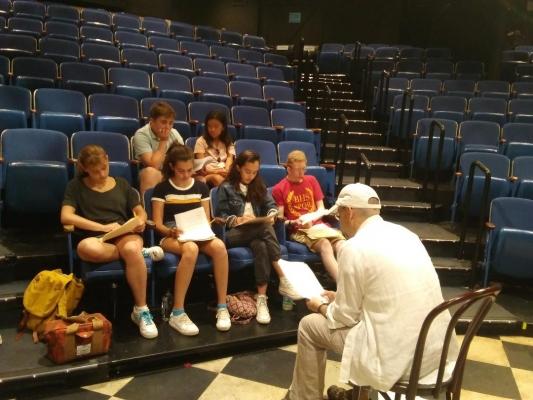 In this class, students will work with Bay Street Theater's Associate Artistic Director in analyzing a classic scene both on page and on the stage. Students will gain an understanding of scene structure and characterization and how these analyses are conveyed on stage.
Click here for more information about this activity

Will Pomerantz is the Associate Artistic Director of Bay Street Theater, where he recently directed a newly-envisioned production of EVITA as part of the theater’s 2018 season.

He has taught acting and audition workshops and master classes across the country at universities, high schools and middle schools.  He has directed and developed new plays and musicals with such theatres as The Guthrie, American Repertory Theatre, 2nd Stage, Playwrights Horizons, The Public Theatre, Hartford Stage, New York Theater Workshop, The Signature Theatre, The Kennedy Center, Soho Rep, Culture Project, The Williamstown Theatre Festival, The Studio Theatre, The Mark Taper Forum and Ensemble Studio Theater.

Will was the Boris Sagal Fellow in Directing for Williamstown Theatre Festival, as well as Staff Repertory Director for The Acting Company, and is an alumnus of the Directors Lab at Lincoln Center, a Usual Suspect at New York Theatre Workshop, and a member of Ensemble Studio Theater.  He is also the co-librettist for the new music theatre works This Side of Paradise and FOR THE LAST TIME, and has adapted the writings of Dickens, John Cheever, Dorothy Parker and Christopher Isherwood for the stage.